28 Weeks
Confession time, I forgot to get a bump shot for 28 weeks. A fair bit happened and it was just put off while there was other things going on.

Baby - This week baby is measuring up to be around the size of a cantelope melon (37.6cm) and weighs about 2.2 pounds!

Baby should now be able to see my face when we are breastfeeding. His sight has gotten that good already. He can also blink. Another huge milestone is the area of brain thought to be responsible for consciousness is starting to become active.

Me - I'm still suffering really bad with heartburn and acid reflux. It's there most of the time now. Thankfully ice pops and Rennie have been getting me through, I'm hoping it'll dissipate a little as time goes on.

Now that I'm in the third trimester I'm finding it harder to stay asleep at night. I'm okay getting to sleep but I'm already waking 4+ times a night. Between being uncomfortable and needing to use the bathroom I'm getting less and less sleep. It would usually have been around this stage in my previous pregnancies that I would use my pregnancy support pillow. However it was one of the first things to go after having Scarlet.

My bloods continued to be on a Friday last week and I knew before they'd even taken them that it was back. My bile acids had jumped up to 15 so not the astonishing 111 they jumped to when I was pregnant with Scarlet but it's still three times the normal level. So as things stand I have Obstetric Cholistasis. I'm on the medication to try and help control my bile acid levels since the third trimester is when this condition is considered it's most dangerous. It also means we won't be reaching 40 weeks in this pregnancy either. So far this week the itch has stayed the same. 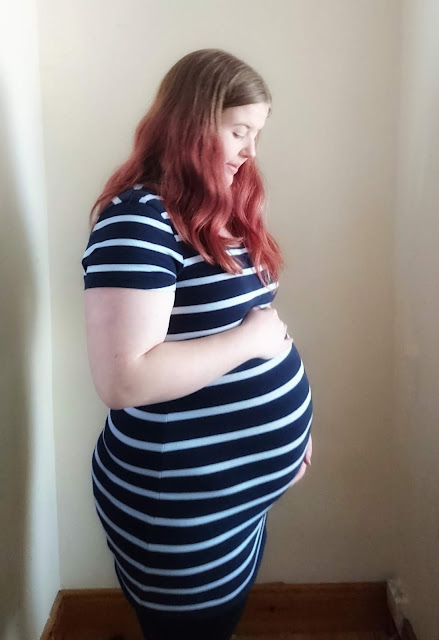 This is around the time I wrote my last bump update with Scarlet. It wasn't intentional and although I went on for a further 7 weeks of pregnancy it was a time when I was spending more time at hospital in preparation for her arriving. This time I want to make sure we keep going through to the end.

Baby- Around now our little boy is around the size of a cauliflower (38.6cm) and weighs in at around 2.5 pounds.

It's amazing to think that by the time I give birth he'll be more than double his current weight!

Me- I'm very aware of how little time is left of this pregnancy. There will be less than 9- 10 weeks before we have a baby. Which is crazy! I've hit my nesting already. I'm organising, cleaning, clearing and preparing for the baby anytime I have some extra energy.

I'm still struggling to stay asleep at night which is having a knock on effect. Having two children to keep up with which growing another is certainly not easy! I don't think the fact I am struggling to eat a proper meal now is helping. As baby grows my stomach is getting smaller which is perfectly normal however I am just not getting very hungry other than at meal times.

I managed to have my fasting bloods done twice this week. The usual Friday appointment saw them double despite me now being on ursodeoxycholic acid to try bringing them down. My appointment was moved up to be on Tuesday. However come Tuesday evening I'd got a call and had to go up to the hospital and speak with a doctor. I've now had an extra dose added on every day and we're around half way between normal and what is considered to be really dangerous levels. It does mean that I'm going crazy with itch and I now very vividly remember just how bad this was in my last pregnancy. I'm really hoping that from here on out they'll start to drop.