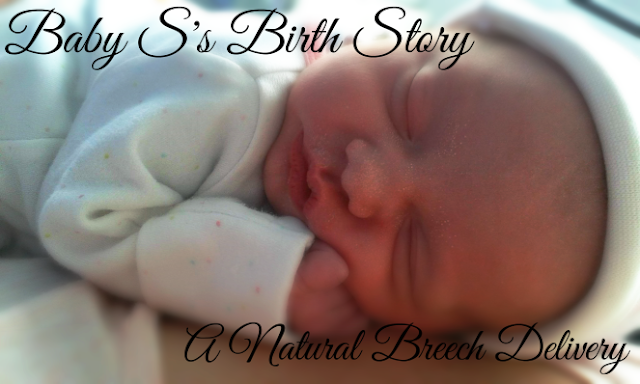 I have decided to do Baby S's birth story in two parts or it would be one seriously long post! So here is part one..


Having had a complicated pregnancy with Baby S we knew her birth would come early and we needed to be prepared. We also knew that she was breech and I had in fact been booked in to have an ECV (External Cephalic Version) to try turning her on Thursday 15th June and I would be booked in for induction or C-section following the procedure.


Baby S however had other ideas about her arrival!


On Monday 12th June 2017 I woke up several times very early in the morning. I remember wondering why I was waking up again and  again but it never seemed to be getting any lighter! After a while I decided the best thing to do was stay awake and see just what was waking me since I didn't need to use the bathroom and Baby S wasn't being active while I was awake. D was fast asleep beside me in bed (My sister had arrived and was sleeping in his) there also wasn't any noise in the house.


After about 15 minutes it became very clear why I was waking up. I was having contractions! I was only 36 + 3 weeks and thought it had to be Braxton hicks since I had been having them for a few weeks if I was too active or over doing things. When I continued getting them and they seemed to be getting slightly stronger each time I decided the best thing to do was to time them. I quickly found my pregnancy app on my phone and sat up in bed ready to time them as they came. The first contraction I recorded was at 5:25 am and they started out being around 11-12 minutes apart. I wasn't feeling much pain with each contraction just the tightening of my stomach which came in a wave and ebbed away in the same way. At this point I wasn't concerned that I was in labour and in fact was still convinced that I wasn't. After 3 or 4 contractions it was already after 6 am and I decided that the best thing to do would be to wait for 8 am and get D ready for nursery, take him and once I got back I would wake Simon so we could go get checked out at the hospital.( I wasn't as freaked out as I had thought I would be!) It didn't seem to be as painful as I remembered with D. Although looking back that was probably because D was back to back and then turned during labour.


I did get up to go to the bathroom not long after 6am and when I did get up and walk to the toilet then back to bed I found the time between contractions jumped from 11-12 minutes to around 7-8 minutes apart! This helped convince me that I couldn't be in real labour. It is supposed to progress not jump up by 5 minutes. Once settled back on the bed they slowed down to around 9 minutes. each contraction would last around a minute and I was easily able to breathe through them without moving around. Pretty soon 7am had come and gone, the contractions had slowly been edging toward each other and I realised I would have to wake Simon up to take D. Not long after that and another trip to the bathroom my plan to get D to nursery before heading to the hospital was out the window and I got D up. We headed down stairs where I woke Simon up and finally told him that I was having contractions. I headed to the kitchen to make breakfast (I now realize how crazy that was!)  where I had quite a strong contraction and I had to stand humming to myself while swaying on the spot. At this point I woke my sister up and sat down at the dinning table where I phoned the hospital and was told to come up and to bring my notes. Since I was still convinced I wasn't in labour (Yep!) I did bring my notes along with the things to test my blood sugar and some water just in case I needed them. (Notice I didn't bring my hospital bags?! Crazy lady right here!)


At this point they just seemed to get closer and stronger. Simon helped me to get my leggings and top on through the contractions and I was aware D was ready to leave for nursery somewhere. I had no real idea where but it must have been in the room. While we waited for the taxi I gave up on the app. By this point I had started to cry during contractions. They had started to hurt but I could still breathe through them while crying. I was getting worried since I am pretty sure I was the calmest person in our house at this point! D was worried (more about me being sore and crying) and all the adults looked pretty freaked out! D left with my sister and her boyfriend for nursery.


Fortunately it didn't take long to arrive at the hospital and I was seen as soon as we walked through the door. They took us to an admissions room for some checks. I firstly went to the bathroom ( I swear I went to the toilet 5 or 6 times in only a few short hours!). While in the bathroom I noticed quite a lot of blood and I really panicked! I remember shouting "there is lots of blood"! They didn't seem phased at all and just said "it is probably your show". Now I had my show with D while at home and it was nothing at all like what happened then! Once I had emerged from the bathroom One midwife connected me up to the monitor for baby's heartbeat and the contractions. This didn't last long since baby S had the hiccups and her heartbeat kept disappearing.


Another midwife at the bottom of the bed was telling me to breathe in taking deep breaths through the contractions since I was now making noises with each one and moving around on the bed. I really wanted to  scream that no breathing through them wasn't f***ing working anymore! I did manage to keep that to myself.


A doctor came in with the scanner so they could check baby was okay and also to check had she turned around or was she still breech. While they scanned me the doctor was preparing to check how dilated I was. As soon as they confirmed she was breech they discovered I was actually 7cm dilated! The next question was if I wanted some gas and air! Which I was very grateful to get and it instantly made an incredible difference. After that things happened in a blur.


Someone came and told me to make a decision on a c-section or giving birth naturally. A choice I had wanted to have with more time to prepare and research but that I didn't actually think I would be offered. I wanted to know which was safer. Of course they couldn't answer. Both carry their own risks and it is a matter of opinion which they can't give you. I really didn't want a c-section if I could avoid it. I did know we could still end up there should anything go wrong. I was told to really think about it and decide by the time we got up stairs in the lift. ( I am not sure how much thinking you can do in those few minutes while contracting) I knew I wanted to try to give birth myself over c-section if they would let me so we headed for the delivery suite and met the midwife..


This is where I am going to leave it and will pick up in part two of Baby S's Birth Story.