I know that now it is actually 2017 and 2016 ended 5 days ago however I am now starting to get my energy back! (At last) I will be catching up on the posts I have neglected to get up over the last few months during the next 2-3 weeks. However I thought I should start the year by reviewing our 2016 as it has been a pretty eventful year for us!


During December of 2015 and the start of January 2016 we had to decide which nursery we'd like D to attend starting in September 2016. To some this would have been a decision that was made before their child was born. For us this was not the case, D was born in an area with one nursery and since then we have moved three times to two completely areas from which neither Simon or I grew up in or around. The nurseries and schools that we attended are not even in a close range to us now and in fact are miles away. This meant that we had a lot of research to complete and a few nurseries to attend where we could view the settings. By January we had made our choices and the form had been sent off to our top choice. From that point on we would have to wait and see (for months!).


At the very end of January my Great Granda Died and brought on the first real emotions about death that I've had to deal with. I know I'm very lucky to have got so far in my life without any close family or friends deaths but it was hard and I struggled a bit with how it should be or should feel.


Most of our February was spent doing family days out as the weather started to slowly turn around and we had sunny days. We spent our days at the park and really enjoying the time we had together.

March brought with it one of the biggest events of our year, D's Birthday. This year we did something different, we didn't invite one person or have a party. For D's first birthday we had a large party that I spent almost 12 hours baking things for. Not even half the invited people turned up and we wasted so much money I said I wouldn't do it again. For his second we invited my family and had a little celebration with Simon's family which was nice however I fell out with most of my family by March 2016 and it wasn't an option. Instead we decided to take D to one of his favourite places, the Ulster Museum at Botanic Gardens in Belfast, we had an amazing day and D was delighted with every second!


The very last day in March we met up with fellow blogger, Rebecca from Mum Of A Premature Baby and her son C for the first time and a lovely little friendship was started between the two boys. Life has become more hectic for us all over recent months but we will still see them as much as we can.

With April came the sun and the better weather (at last!). This time it was however my turn to make a new friend and we spent some time during April really getting to know each other and getting outside. The last day of April was a big moment for D as I took him for his first ever cinema trip and he loved it! We have since been back several times now and will be going again very soon.


During April we also heard back from the school board about D's place in nursery. He was accepted by our second choice nursery which I now think was very fortunate for us as I think we would have been much more stressed out about getting ready for school in 2017 if we had got him into our first choice which was actually a nursery that had no association with any school.

During May was spent outside either walking, going to the park or playing in the garden almost every day as we had wonderful weather. It was also both the start and end of our potty training journey! D was pretty amazing through potty training and whizzed right past it within a month which had been very unexpected and now happily forgets he ever used nappies.


We spent all of June and July really doing as many family activities and days out as we possibly could before it was time to start preparing D for the start of nursery and going on holiday.

August brought with it our holiday. We spent a week visiting my mum and enjoying all the wonderful things the southern coast of England had to offer us! The weather was fantastic (for us) and we had a wonderful time with family and fun every single day. We also took D to his first ever beach while we where there and it was brilliant. He just loved it and I know I will take him to a beach here this year if I can. It was half way through the month when we got back and we spent a few days really enjoying our early days free before D started nursery at the end of August.


Throughout September we stayed in most of the time after the weather started to cool down a bit and become rainy. We also found that after D started nursery everyone kept catching some sort of cold, flu or bug. This did carry on through October, right up and over Halloween.

During November we got our Halloween decorations up and started to get in the festive spirit with lots of family time. It was at the start of November that we also found out that we are going to become a family of 4 during 2017. (more on that coming very soon!)

December of course brought with it Christmas and all the festive cheer of the month. This year D got to enjoy a new book every day of the month through his book advent calendar which he loved. We also got to celebrate both mine and Simon's birthday's! Which was fun and really made the time D got off nursery fly by before Christmas. Another friend that arrived during December was Rennie the elf who came and stayed with us until Christmas day.

On Christmas Eve it was finally time to share our growing family news with the world and we posted about baby number two who will be joining us this July! We are all very excited.

Christmas for us was both wonderful and a little sad. This Christmas was our very last as a family of only three and we made the most of it. Miraculously we had not one upset or tear shed and we all had fun right through from 5am until after 10pm when D went to bed. Our dinner was delicious and we all enjoyed it together after we did a lot of playing and running around just enjoying ourselves. This pretty much carried on right through until it was almost new years.


How was your year?

What I read in January 2021 {Monthly Book Round-up}

At the start of the year I shared that one of my hopes was to read more books . I set myself the challenge of reading 30 books in 2021. Now ... 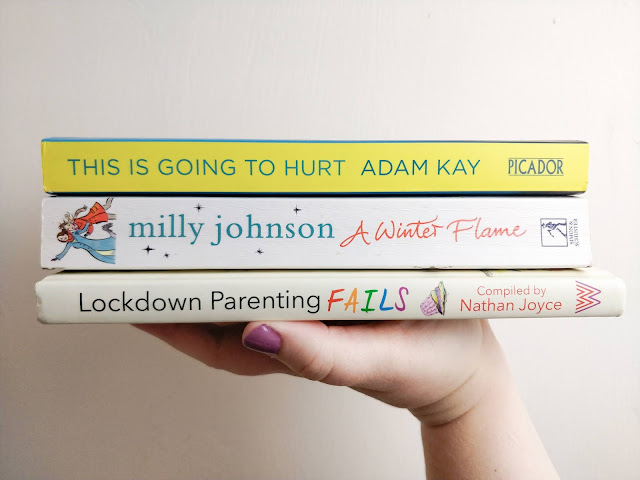