Our Adventures This Week #35

This week we have been much more relaxed than last week but that seems to really be our pattern, one week we get really really busy then the next we have a pretty good pace to our week.


We spent Monday at home with D playing most of the day with his toys or watching Dora The Explorer on TV. Myself and Daddy spent most of the day cuddled up on the sofa watching a film or two before Uncle L came back from school. We then spent the rest of the day tiding up around the house as D had made quite the mountain of toys and puzzles in each room!


Tuesday was a fun filled Day for us all, We did have a few bits we needed to pick up so we had a little shopping trip which only lasted about an hour. Once we got back home we quickly put the shopping away and off we went to the park with D. He was very excited about going to the park and playing on the slide. We did take a while to get into the park itself as D became quite the little explorer and wanted to find everything he could on the way there! We have lots of photos to share with you. D even made Daddy join in and run around the climbing frame with D!

After the park Uncle L came home and we got to making another dinner Made by everyone, which we will be sharing with you next week so keep an eye out for it.


I had to take Uncle L to the doctors on Wednesday as he had his appointment which went very well and he now has a doctor. Finally! We also had to go into town to get a package I had missed when we went to the park. After we got home it was pretty late and we just had dinner and all got ready for bed before we watched a movie.


On Thursday we didn't manage to get to anywhere but Nannies as we ended up all sleeping in and running rather late but we did spend a little while at Nannies and she found her dog! D had lots of fun playing in Nannies before we had to come back home (well past bedtime!)


Yesterday I did spend most of the day sorting out some of the few boxes we still had downstairs from moving in. Daddy and D played games together and D helped me unpack the boxes when he was allowed. We also had a great big development in the potty training yesterday afternoon/ evening. D asked to put some pants on instead of his nappy! Although he didn't use the toilet as I did have to put a nappy on for bed but he will have them on all day today and we can see how we go.  After a few TV shows I got a bit carried away with making something which I am going to share with you all next week too. This is the reason I am posting very late today, I did not realize how long I spent doing this and very quickly 10pm turned into 2am! 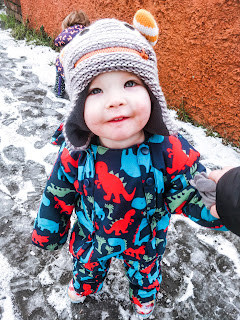