This week we don't have anything to report in Our Adventures This Week, as in a moment of what I can only call complete and utter madness I agreed to D going to stay with his Granda for a few days. So I know what your thinking... It is only a day or two? Well that's what I initially thought too.

It all started when we where doing our normal shopping trip. D had been making it clearly evident that he didn't want to do any shopping,he kept trying to run out of shops (we have backpack reins) and when this failed he literally threw himself on the floor and pretending to cry. Yes pretending he didn't actually cry! After 2 hours of this happening I was getting to my wits end, when D decided it was a brilliant time to flop down in the middle of Iceland and scream because we wouldn't let him carry a raw gammon joint! People where looking at me as if I was the most evil person they had ever seen! I was now getting angry with everyone, if my child wants to have a tantrum because I won't let him carry raw meat that's fine but it's none of their business!

We did manage to calm D down and get around another isle before my phone went. My dad wanted to ask could he take D for a few days.. This has happened before when D can't go up for a few weeks he will take him for an extra night when he can. So with this in mind I agreed. Later on, just before he arrived to get D I asked how long he was planning to keep him. His reply was until Saturday, for some reason this didn't register in my head until after he was here. I did think I could do a few days without D.

Well as it turns out the thought of not seeing D for 4 nights is just too much! I managed to go about 9 hours before I started to really miss him, I kept looking up thinking I could hear him only to remember he's not here. 2 hours later and I had somehow ended up in bed, crying. Yes I was really lying in bed bawling my eyes out after 11 hours of not seeing my little tantrum thrower! It was at this point I realised that I have attachment issues.

I must confess this really rattled me as D has been staying with his Granda every possible Friday from he was 3 months. To make matters worse I didn't cry the first, second or any other time D has stayed out. So I decided that I was going to try and do this for both D and myself (I do need to be able to let go for a few days at some point) so why not now?

I went to sleep still really missing D but feeling able to relax just enough to sleep. After waking on Wednesday actually feeling like I could get through the day and if I couldn't then I'd ask for him to come home early.

We made plans to go see some family members and visit the Continental Market (where my aunt works). After arriving at the market she asked where D was, so I explained. This seemed to make me start to feel like I had the night before but I put it to the back of my mind. After arriving at our destination I again had to explain where D was, twice. After the first time I couldn't shake the Feeling of really missing D. At this point I could tell I was beginning to feel a little Depressed over everything.

D had now only been gone for about 26 hours. I couldn't concentrate on anything for longer than 10 minutes. I was still having conversations with people and seeming to be okay (even to myself). After 3-4 more hours I realised that I was just sitting there thinking about D and what he was doing or how he was and that I had been doing this for about an hour! I promised myself I would try to get through until Thursday morning as after all he hasn't seen his granda, aunt's, uncle's, nanny or cousin (yes they all live together) since Halloween.

This didn't really work as by 11pm I was sending my dad a message telling him that I wanted him to bring D back on Thursday (I didn't mind what time, but it had to be Thursday). After about 1 hour of messaging we had agreed that yes he is coming home on Thursday about 8pm and going up to visit with me today (Saturday). Immediately after this conversation, I suddenly didn't feel depressed or even sad anymore. I was very optimistic and glad that he would be coming back home on Thursday in time for a bath, very very big cuddles and a story before getting ready for bed.
When D arrived I got a huge hug and kiss. Then granda asked him if he wanted to go again! (I could feel myself start to panic) D's immediate reaction was to try and get to him to go back with him. I have to admit that this actually really scared me, he had only been in the house for about 3 minutes. D cried when I wouldn't let him go back with granda and this broke my heart. But I just couldn't let him he was only back, although he did then wave to granda and his auntie when he calmed down a few minutes later. He even give them hugs as they where leaving. Then something happened, D got up onto the sofa beside after they left and held my hand as tightly as he could. Now you have to understand D holds my hand for very few reasons; to lead me to something he wants, when crossing roads and to go to sleep in bed. He has never just held my hand! I would like to think that this meant that he too had missed me a lot.

Looking back now on the past few days I do realise that maybe I was being a little bit selfish. However in my defence everyone around me could tell that something really was wrong. I cried both nights he was gone and I actually felt like part of me was missing. I do feel like this is something I really need to work on. I know that D can't be with me most of the time for the rest of his life, but for right now I know that 2 day's is definitely my limit and I will not be testing this boundary again any time soon.
I never realised how attached I am to having D around. I know that some of you will be reading this thinking 'she is crazy', but well frankly yes I am! I am completely comfortable with being the crazy mummy if it means I don't have to experience this feeling again. I also know that I can't be the only mummy out there with attachment issues.
So I would really love to know about your experiences on the matter. Leave me a comment and let me know:
What's the longest you have been away from your child if ever and how did you feel?

A year of Eco-friendly Swaps challenge - The beginning

In a world with an ocean full of plastic we must do better! We've spent years using and abusing our planet and nobody is free from the ... 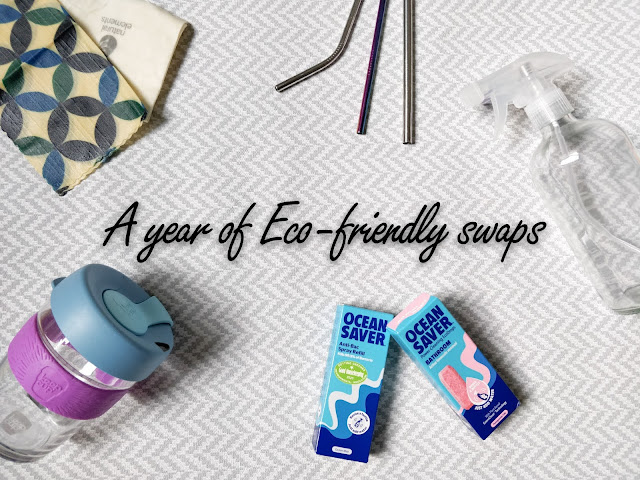